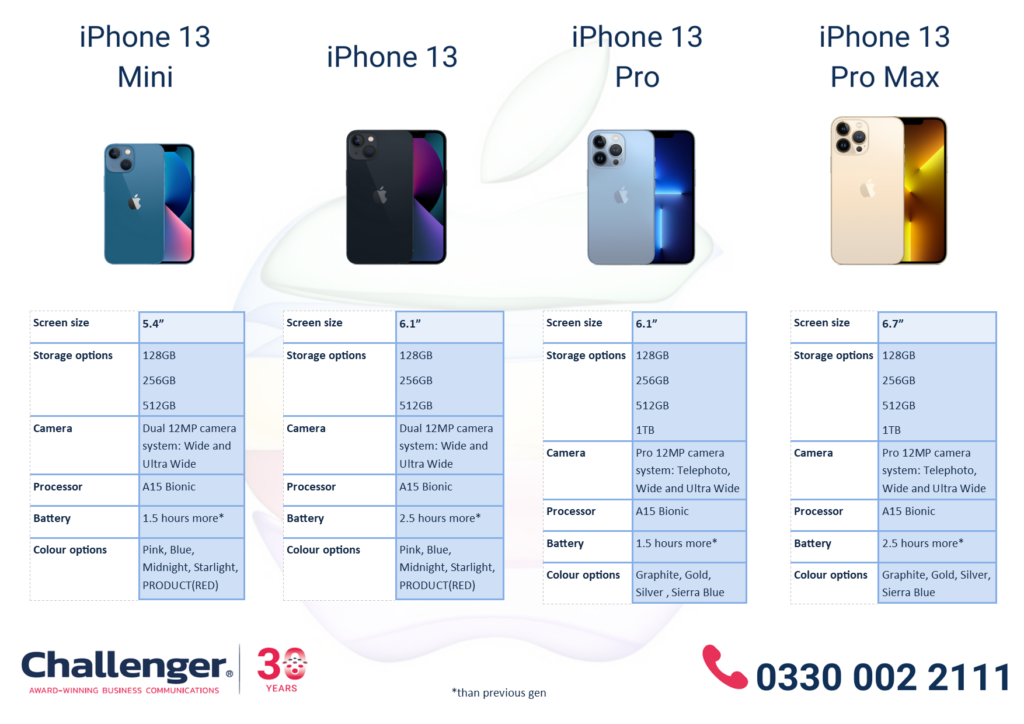 ProMotion is Apple’s name for the adaptive, high refresh rate, 120Hz display. While a standard refresh rate will update a display 60 times a second (60Hz), the ProMotion’s adaptive 120Hz screen works at twice this speed. This results in smoother scrolling, improved responsiveness, and better gaming performance. All devices are powered by the world’s fastest smartphone chip – Apple’s A15 bionic. The whole range features a 20% smaller notch compared to the iPhone 12 models, and improved battery life across the board. Apple also announced they are ditching the plastic wrap that previously encased new iPhone boxes, saving 600 tonnes of plastic!

If you’re looking to upgrade to the latest iPhone, get in touch with Challenger for your options today!

Life at Challenger – Planting our trees

Get in touch to discuss your requirements today.

How can we help?

You can find out more about which cookies we are using or switch them off in settings.

This website uses cookies so that we can provide you with the best user experience possible. Cookie information is stored in your browser and performs functions such as recognising you when you return to our website and helping our team to understand which sections of the website you find most interesting and useful.

Strictly Necessary Cookie should be enabled at all times so that we can save your preferences for cookie settings.

If you disable this cookie, we will not be able to save your preferences. This means that every time you visit this website you will need to enable or disable cookies again.

To deliver a better experience to visitors we to collect anonymous information such as number of visitors to the site, most popular pages and user activity. We do this using cookies.

Please enable Strictly Necessary Cookies first so that we can save your preferences!